Home News Congratulations to the Last Straw in Tullow CS

Congratulations to ‘The Last Straw’ from Tullow C.S.  Runner-up in  ‘The National Student Enterprise Awards Final 2020’ 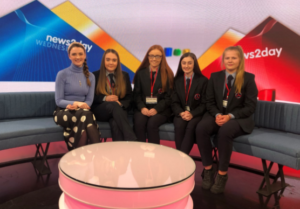 Congratulations to both the Transition Year Enterprise Students from Tullow Community School who came Second in ‘The National Student Enterprise Awards Final 2020’ and to Mr. Brian Farrell the Enterprise Teacher in the school. 26,000 students from over 500 Secondary Schools across Ireland took part in the competition throughout the year. 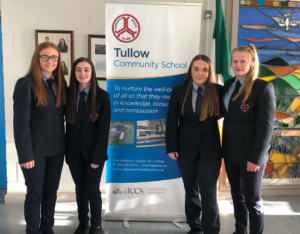 In September 2019, Megan Doyle, Ellie Byrne, Dannah Kearney O’Brien and Michelle Murray set up their own company called ‘The Last Straw’ and their company slogan is ‘Saving the world one straw at a time’. At the time, the four enterprise students were very much influenced by what was on the news about sixteen-year-old Greta Thunberg and the importance of being aware of the impact that we are having on the environment. Greta is the same age as us and as four teenage girl’s we knew this was a topic that we just could not ignore. We were just sitting as a group of friends in McDonald’s and drinking through their paper straws when we had a light bulb moment! We realised that we did not like the paper straws as they soon became soggy and were not nice to drink through. We also knew that the paper straws while better than plastic would still end up in landfill or being recycled. We realise that reuse is better than recycle and that’s when we got the idea to provide Stainless Steel reusable straws instead. This was the starting point for our company and we have not looked back since then!

We decided to call our company ‘The Last Straw’ as this is the last straw you will ever need. Our Stainless-Steel Straws are dishwasher proof and customers can just bring the Stainless-Steel Straw with them in their car so that no matter what fast food restaurant or cinema that they go to they can just use ‘The Last Straw’. We decided to target primary school students initially with our idea. We carried out market research among five local primary schools to identify if there would be a demand for our idea of providing Stainless Steel reusable straws. We explained the idea to each individual class group and outlined the benefits to them. Standing up in front of these students in classrooms where we had once sat and outlining our idea to them was a significant experience for us as young Entrepreneurs. The students loved the idea and wanted to get involved straight away. This generated sales of just under 500 straws with an income of €1400. It was a great start for our business!

Even with the success we were having in the Primary School’s we knew that we could take our company further. We thought of our idea when we were sitting in McDonald’s as a group of friends so we decided the next step was to target McDonald’s themselves. We got in contact with Bernard Byrne who owns five McDonald’s franchise outlets to see if we could use his outlets as a platform to sell our Stainless-Steel reusable straws. He loved our idea and put us in contact with his son John Byrne who is the operations manager for the five McDonald’s outlets. We arranged to meet with John and we negotiated an agreement with him whereby we could sell our straws under our own company name and slogan. ‘The Last Straw’ is now available in five McDonalds outlets: Carlow Town, Tinryland, Wexford and two outlets in Blanchardstown. We want to say a big thanks to John Byrne who supported us from the start. 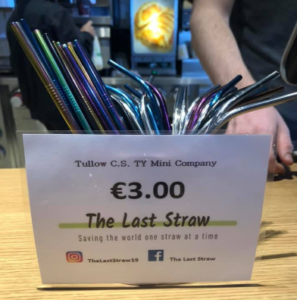 We also contacted Pat McDonagh the owner of the Supermacs franchise business as they are the biggest Irish owned fast food restaurant chain. We were chatting to Pat on the phone in October 2019 and he was really impressed with our idea. He asked us to trial it with Supermacs on a local level first and based on how well that went he would look at allowing us to expand wider through the Supermacs outlets. As a result, we contacted Richard Quinn who is the manager of the local Supermacs in Tullow. We arranged a meeting with him and negotiated an agreement whereby he allowed us to use his outlet as a platform to sell our straws under our own company name and slogan. We also contacted Paul O’Brien who is the owner of the Supermacs franchise outlet on the Dublin Road Carlow. We are proud to say that ‘The Last Straw’ can now also be purchased in Supermacs on the Dublin road Carlow in both the outlet and the drive through. We want to say a huge thank you to both Richard Quinn and Paul O’Brien for backing our idea of ‘Saving the world one straw at a time’.

Now that ‘The Last Straw’ was available more widely through both McDonald’s and Supermacs Franchise outlets we knew that we needed to generate more publicity for our idea of ‘Saving the world one straw at a time’ so in December 2019 we contacted Sue Nunn from ‘The Way It Is’ show on KCLR 96 FM and asked to be interviewed. We would like to say a huge thanks to Sue Nunn for interviewing us and making us feel so comfortable. A lot of teenagers from across Leinster listen to Beat 102-103 so we knew that if we could be interviewed by them it would have an impact on our target market. We were interviewed on ‘The Sunday Grill’ show on Beat 102-103.

With the increasing demand for ‘The Last Straw’ and our concept of ‘Saving the world one straw at a time’, in January 2020 we decided to set up our own Company website www.thelast-straw.ie where our customers could order their own last straw in different colours, shapes and sizes. We would like to say a big thank you to ‘Blacknight’ in Carlow for sponsoring our website.

We were delighted to win the ‘Carlow County Enterprise Award’ in March 2020 and we were honoured to represent County Carlow at the ‘National Enterprise Awards Final’ last week, where we finished Second. We would like to say a huge thank you to our Enterprise Teacher Mr. Brian Larkin who facilitated the programme and supported us every step of the way, for without him the success we have achieved would not have been possible.

We are the generation who want to solve problems and not just passively wait until they become somebody else’s. We hope that you will join us at ‘The Last Straw’ and together let’s ‘Save the world one straw at a time’.

We use cookies to ensure that we give you the best experience on our website. If you continue to use this site we will assume that you are happy with it.Ok